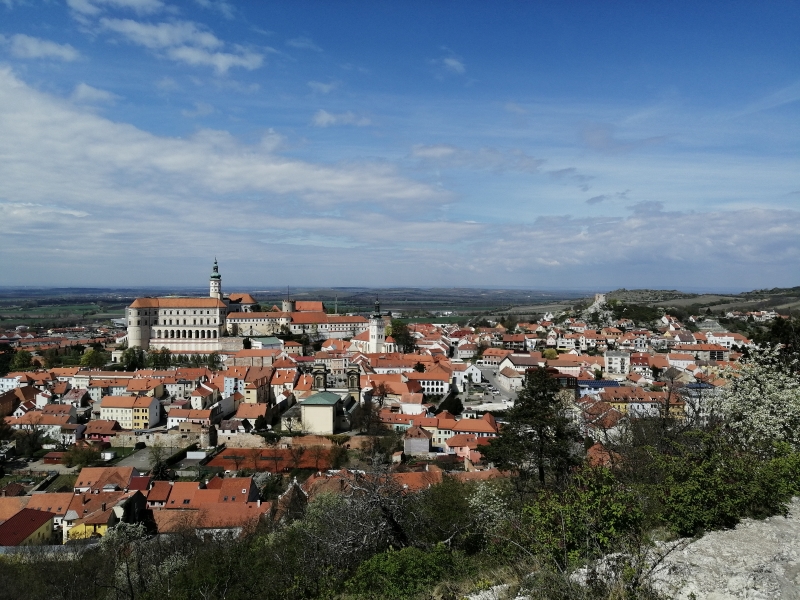 It has been a long time since I published my last post, but here I am with a new one. I would like to present you a picturesque town of Mikulov located in South Moravian region of the Czech Republic.

As you probably now, I don’t spend much time in the Czech Republic. I currently work in Spain, so I only get to visit my home country when I get holiday. While writing this post, I am home in Chrudim. Last week I got a chance to visit the town of Mikulov and I actually realized that I have never visited many beautiful places in Czechia. I get to know foreign countries but at the end I don’t know places in the country I was born in. Well, that’s what happens when you want to travel abroad so badly. 🙂 Anyway, let me tell you about Mikulov. 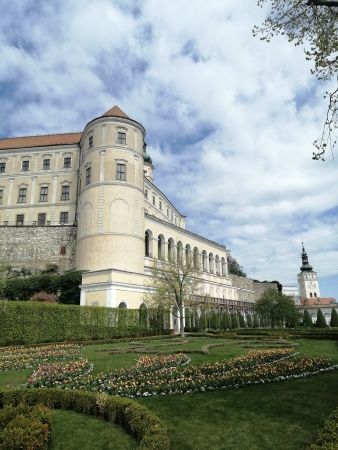 Mikulov is a historical town situated in the South Moravian region in Czechia. This charming town is full of sights and above that it’s surrounded by vineyards. The wine growing has a centuries long tradition.

The first written mention of the town comes from the 12th century. The town of Mikulov was first developed as the centre of the estate by the Liechtensteins in 1249–1560. The Dietrichsteins ruled here in the years 1575–1945 and the town enjoyed its greatest boom during this time. The new Renaissance conversion of Mikulov came to a climax after 1575. Franz von Dietrichstein was a highly significant figure in the history of the town. He was responsible for Mikulov’s transformation from a small provincial town into the most important town in Moravia at that time. ¹

The unmissable landmark of the town is the chateau. The former Liechtenstein and later Dietrichstein castle on the rock has been a unique dominant of the town skyline for centuries. No one would say that the castle was burnt down to the ground by fire in 1945. In 1950s it was reconstructed and became the seat of the Regional Museum in Mikulov, housing art and historical collections, including artifacts relating to the history of local wine production. You also get to see a giant barrel with the volume of 1010.18 hl dated back to 1643, it is one of the largest wine barrels in Central Europe. 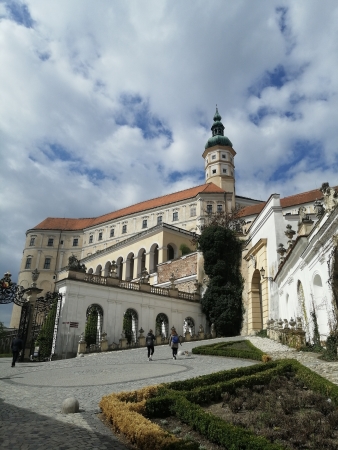 Holy Hill is one of the most important dominant landmarks in Mikulov. The area has been declared a nature preservation area and it is also a famous place of pilgrimage. The Way of the Cross is one of the oldest one in the Czech lands. In total there are 17 buildings: 14 chapels on the Way of the Cross, Saint Sebastian’s Chapel, a bell tower and the Chapel of the Holy Sepulchre.

Goat Tower is another monument situated on the top of a rock. It’s a lookout tower of the former artillery fortress. It was built in 15th century. From the tower you get a wonderful view of the town and surroundings from different perspective.

The origin of the Jewish community in Mikulov can be dated with the period after 1421. The town was a major spiritual centre of Jewishness and Jewish religion. The Jews made up their living by small trades and crafts since 17th and 18th centuries. The end of Jewishness came with the second world war, when just a couple of them survived and never renewed the Jewish quarter in Mikulov again. In the Jewish quarter you can see the Jewish houses, synagogue, cementery, ceremonial hall and Jewish baths.

Other places of interest

Another place to see is Turold cave, the largest and the most important cave of the Pálava Hills. You can also visit other churches – Church of St. Wenceslas, Church of St. John the Baptist and Church of St. Nicolas. In Mikulov there is also Infantry Cabin MJ-S 29 “Svah” – the only completed stronghold in the Mikulov section from 1938 which served the army until 1999 following its renewal.

As I mentioned before, Mikulov and its surroundings is a traditional wine centre. The Mikulov region is known for its white vine varieties – occupying 80% of the local vineyards. The higher lime content in the soil and the warm climate lend white wines made from them special strong mineral taste.² In the region there are many places where you can go for wine tasting. You should not miss the opportunity of visiting a local wine cellar. It’s a unique experience!

What did we visit?

When we arrived to Mikulov, we headed to the castle. It is truly impressive. Unfortunately, we didn’t get the guided tour in order to visit the castle inside but I think it is really worth visiting or at least I got the impression that it would be interesting. Next time I’ll definitely go to see it.

Anyway, we only walked around the castle through the lovely gardens, enjoying the beautiful views of the countryside. After that we passed by the historic main square with the St. Anne’s Church where the Dietrichstein Tomb is situated. Then we followed the way and started climbing up to the Holly Hill following the Way of the Cross. Once we got to the top, we could enjoy the view. It was spectacular and we didn’t regret of walking uphill. 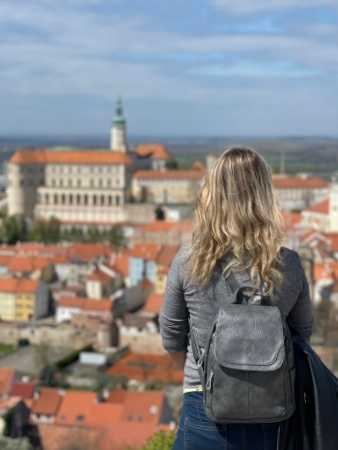 After going back to the main square, we were looking for a place to have lunch. There were several restaurants open. At the end we chose the restaurant Bistro Drogérka. The food was delicious, unfortunately, the customer service was very bad. The staff didn’t care about the customers at all. That’s why we decided to have a coffee at a different place and we end up in (Ne)vinná kavárna. After having a coffee, we had to leave Mikulov and went back to Brno.

I have to admit that I really enjoyed our time in Mikulov. It’s a splendid town full of sights and wine culture. The views of the landscape are superb, especially the view from the Holy Hill. The weather was great, the sun was shining. We couldn’t complain. Such a beautiful day in this lovely town! Nevertheless, if you ever come to the Czech Republic, you shouldn’t miss visiting the town. I am sure you’ll love it!