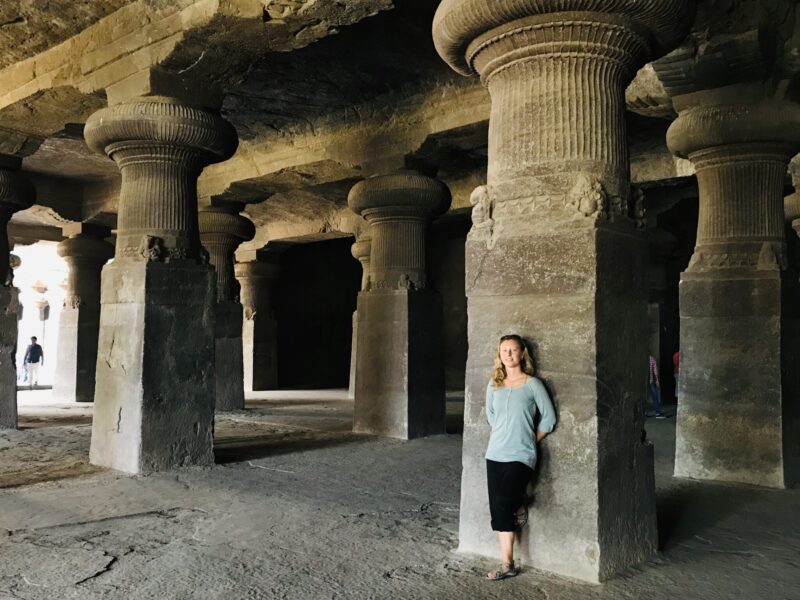 Last year when I was in India, at the beginning of my journey I visited the India’s Golden Triangle and at the end I spend a few days in Mumbai.  I visited some famous places in the city and one day I took a trip to Elephanta island. Since those days were my last before I went home so I tried to make the most of it.

Mumbai is the second most populous city of India and is the capital of the Indian state of Maharastra. It is fondly called the city of dreams. It is a place filled with dreamers and people who work hard day and night to achieve their dreams. From struggling actors, laboureres, Bollywood stars to gangsters. Mumbai is also home to one of the biggest slum area as well as home to the richest and thus it is only fair to describe Mumbai as a city for all.

As you can imagine, Mumbai has many places of interest. Do you wanna know which ones I visited?

The Gateaway of India was the first place I saw in Mumbai. After spending four weeks in quite touristic Goa, I nearly forgot how it is to be popular among the Indians. Many of them were staring at me, some of them dared to ask me to take a photo with them. Sometimes I agreed, sometimes I tried to escape with the help of my Indian friends.

Anyway, the gateaway is probably the most favourite place in Mumbai. There were many people every time I went there. I just regret that I couldn’t see it at night because I was told that it is very beautiful.

The Gateaway of India was built in the 20th century and is one of the biggest tourist attractions of Mumbai. After its construction it was used as a symbolic ceremonial entrance to British India for important colonial personnel. The gateaway is also the monument from where the last British troops left India in 1948, following Indian independence.

The building stands beautifully overlooking the Arabian Sea and the location of this building is what makes it so attractive. Right opposite to this attraction stands another beautiful and historical building – the Taj Mahal Hotel. 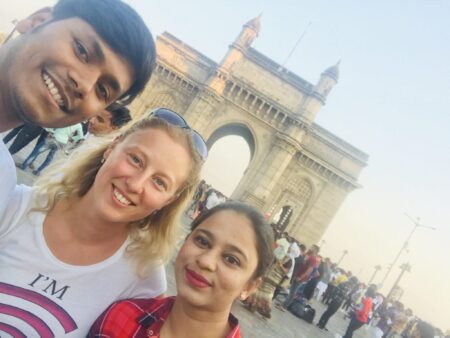 The Taj Mahal Hotel is quite a big hotel. We just saw it from outside and it looked luxurious.

The Taj Mahal Hotel is a heritage, five-star luxury hotel. It has existed even before the Gateway of India was erected. It opened in 1903 and it was the first in India to have electricity, American fans, German elevators, Turkish baths and English butlers. In 2008 the hotel was attacked and partly damaged by a terror group who aimed at multiple targets. Nevertheless, on 15th August 2010, India’s Independence Day, the Taj Mahal Hotel reopened after restoration. The attack on the hotel is portrayed in the movie Hotel Mumbai (2018). 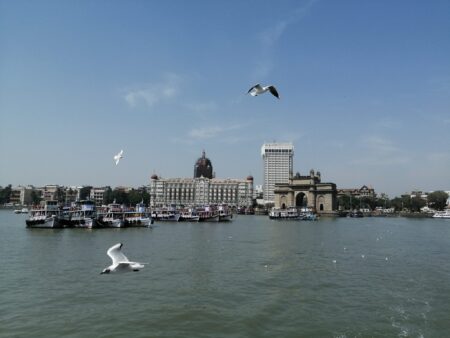 Another well-known place I have to mention is Marine drive. Marine Drive is undoubtedly among the most peaceful places the bustling city has to offer. It is a 3,6 kilometres long promenade along the Netaji Subhash Chandra Bose Road. One evening we went there just to escape from the chaos of the city centre. Personally, I really liked this place since you can just sit along the seaside and enjoy the view of Arabian sea. It might surprise you but its atmosphere kind of reminded me the promenade of Thessaloniki where I spent much time. Marine Drive is a place where you can take a break from your busy life, where you can chill or just meet some friends.

Marine Drive was constructed in the 1930s along the coast of natural bay. It is also popularly called “Queen’s Necklace” as the sparkling streetlights along the huge coastline appear like a chain of stunning pearls at night, creating a virtual picture of an elegant necklace.

Haji Ali Dargah was another place where my friends took me but I did not like it much. Anyhow, Hali Ali is a mosque which is situated on a tiny islet located 500 meters from the coast. Unfortunately, it is not very well preserved and that’s why it did not make much impression on me. Obviously, they do not do any maintenance of the mosque because the builduing did not look well conserved. Also the surrounding was full of rubbish.

When we went to see the mosque, it was very crowded. The weather was nice so many people came there. The majority were Muslims. In order to enter the mosque the women should cover their arms, legs and head. It is a common way to show them respect.

Hali Ali Dargah is an exquisite example of Indo-Islamic Architecture. It is located on an islet in the middle of Worli Bay in the southern Mumbai. The mosque was constructed in 1431 in memory of a wealthy Muslim merchant. The accessibility to the mosque depends on the tides. When the causeway gets submerged during high tide it becomes inaccessible. Therefore, the mosque is accessible only during low tide. This walk on the causeway, with the sea on both sides, is one of the highlights of a trip to the shrine.

The last place of Mumbai city that I want to mention is Bandstand promenade, also called Bandra Bandstand. My friends and I got there in the evening when the sun was setting down. We walked there a bit and then we found a spot to sit down for a while. We bought grilled corn from a guy who made a fire there and was selling it. There were quite many people around but that is India. There are just people everywhere all the time! Anyway, we had a nice relaxing evening there. After we finished the corn, we went for a walk till the end of the promenade. I liked it because there were quite many palm trees along the walkway.

Bandra Bandstand is a 1,2 kilometres long promenade along the sea on the western coast of Mumbai. It is simultaneously a popular hangout spot, a jogging track and a park. This famous walkway has plenty of stardust on it. It is a well-known fact that some of the most glamorous film stars have their apartments or bungalows around it. 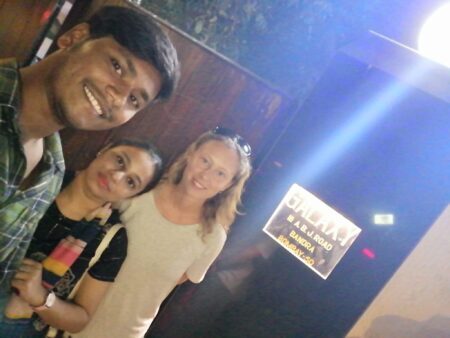 While visiting Mumbai, I wanted to make a trip to the Elephanta island as well. Last day we took a boat from the Gateway of India at 12:00. The journey was supposed to take an hour but our boat was not obviously that fast and we arrived there after an hour and half. When we finally reached the island, we could either walk the one kilometre distance from the harbour to the base of the western hill, home to the Grand Cave, or take a toy train to the site. The train was cheap so we decided not to lose time by walking. I should also mention that it was very hot that day.

Anyway, after the train stopped, we had to climb of 120 steps to the entrance of Cave 1. Along the stairs there were many sellers of different kinds of souvenirs. Many monkeys were also jumping around especially at the caves so we had to be very careful with our belongings. Nevertheless, I really enjoyed the visit of the caves. It is trully impressive what they used to be able to make. When we finished the sightseeing, at 16:00 we took the boat back to Mumbai.

About the Elephanta island

Elephanta island is a popular tourist destination because of the island’s cave temples, the Elephanta Caves, that have been carved out of rock. The island houses a total of 7 caves – 2 Buddhist Caves and 5 Hindu caves. The Buddhist caves are dedicated to Lord Buddha and manifest Buddhist elements whereas the Hindu caves are a dedication to the Hindu God Shiva. According to Archaeological Survey of India and UNESCO, the site was settled in ancient times and the cave temples were built between 5th and 6th century.

Mumbai is a huge city with many opportunities to see, to visit, to experience. There are also many places to see, I just mentioned the ones I visited – Gateway of India, Taj Mahal Hotel, Marine Drive, Haji Ali Dargah and Bandstand Promenade. If you want to take a break from the city rush, go for a trip to the Elephanta island! The Elephanta caves are definitely worth visiting, they are truly remarkable.

2 thoughts on “India: What to see in Mumbai and Elephanta island”