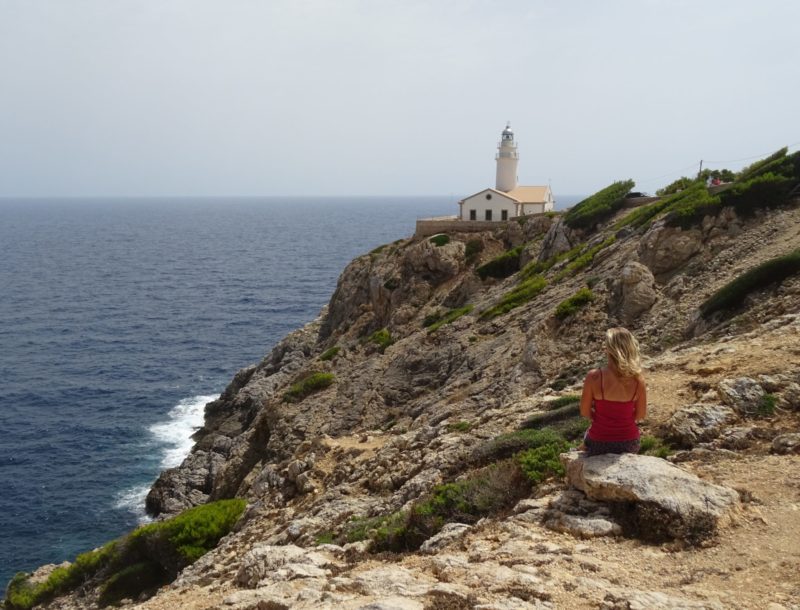 One month ago I had a visit, one of my friends came to see me. We rent a car for two days in order to discover some new places of Mallorca. That’s why I would like to tell you more about our trips, maybe you’ll find some inspiration for your future visit of the island.

In the morning we picked the car up, then we had a breakfast on the balcony and after that we decided to go to the lighthouse in Cala Ratjada. I had already been there three years ago when I was working in that area. That time I actually went there every week with the guests for an excursion. I have to say that it’s a beautiful place that’s definitely worth visiting. Even though you can’t enter the lighthouse, you can still walk around and get stunning views.

Three years ago I also went to the lighthouse to watch the sunrise. It was amazing and I would recommend it to everyone. It was such a peaceful moment, just sitting on the rock, watching the sun rising from the sea and at the same time having a view of the lighthouse. I even wrote a post about it, you can read it here.

Anyway, on the way back we picked up another friend and we went for a lunch together. I had to take them to one of my favourites restaurants on the island – Restaurant Es Cruce. I’m sure you know it from my previous stories.

Restaurant Es Cruce is one of the typical mallorquin restaurants. It’s situated near Manacor, just around 10 minutes by car. The cuisine is mallorquin, the food is very tasty and it’s also quite cheap. When I go there, I like eating snails, quails and “granizado de almendra” (almond slush). The restaurant is usually very busy, people even wait in a queue to get there. Nevertheless, the service is fast and it’s definitely worth eating there.

After lunch we took the car and went up to the Sanctuary of Sant Salvador. It’s a monastery situated 509 metres above sea level at the highest point of the Serra de Llevant near the town of Felanitx. It offers outstanding panoramic views. Its origin dates back to 1348, in the mid-18th century, the monastery was completely restored.

Near the monastery there are two landmarks:

I would definitely recommend to visit the sanctuary, the view is amazing, I liked it there. Our last stop was Cala Murada. It’s a sandy beach with rocky area. It’s characterized by lowcliffs with some houses on the top.

The main reason of visiting this place was because I accepted an offer to do the minidisco on the local event. When we arrived, we got a drink in the Restaurant Playa Cala Murada which is situated straight next to the beach. We were just chilling for a while and then I got ready for the kids’ disco. It was the first time I had done it in two languages (Spanish and English) but I managed well and at the end everybody had much fun.

After the minidisco there was a fiesta Holy but we decided to leave before it even started. The second day we gave a lift to my brother to the airport and then we went to Cala Blava. It’s a quiet village locates near Palma. Its small sandy beach is surrounded by rocks of little height, although the cliffs nearby rise up to 25 metres and provide an excelent panoramic view over the bay of Palma.

In Cala Blava we went to the Restaurant Cala Blava which has a pool with sea water. The first impression was good but in general I wouldn’t really recommend this place to eat. The service is horrible, the quality of food is low and the prices are a bit higher.

Anyway, later we decided to go to Cala Pi. Cala Pi is situated approximately 40km east of Palma. It’s a beach with golden sand and turquiose water. It got its name from the pine trees that surround it.

We didn’t spend much time on the beach as we had to go back to return the car and I also has to go to work. Nevertheless, it was nice just to chill there for a while.

Overall, we had a great time while discovering new places. My favourite was probably the sanctuary of Sant Salvador even though it was a bit cloudy when we were there so we didn’t get such an amazing view. Nevertheless, we had much fun with the girls and we enjoyed the trips a lot. One thought on “Discovering new places in Mallorca”