It’s been an Easter time so I decided to dedicate one post to the Czech Easter. Everytime I speak with foreigners about the Easter in the Czech Republic, they cannot believe that I’m telling the truth. Let me explain you why.

The Easter week consists of “Ugly Wednesday”, “Green Thursday”, “Good Friday”, “White Saturday”, “Easter Sunday” and finally “Easter Monday”. All the preparations are finishing on Easter Sunday. The women decorate eggs to be hung in windows, put in baskets or given to the men on Easter Monday. Men prepare (or, nowadays, buy) their “pomlázky”. “Pomlázky” are braided whips made from pussy-willow twigs and colourful ribbons. Its original purpose and symbolic meaning is to chase away illness and bad spirits and to bring health and youth for the rest of the year to everyone who is whipped. 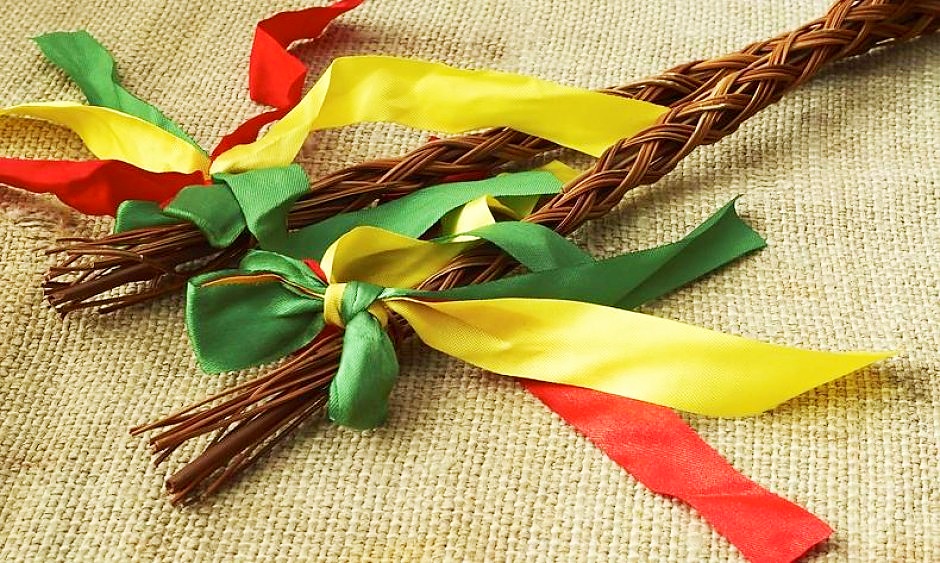 Easter Monday is the main day of Easter celebrations. The boys and men go from house to house (just where they know some girls/women). They whip the girls and women while chanting: “Hody, hody doprovody, dejte vejce malovaný, nedáte-li malovaný, dejte aspoň bílý, slepička vám snese jiný…”. It’s quite difficult to translate into English but it means something like: “Give me a painted egg, if you won’t give me a painted egg or at least a white one. Chicken will lay another to you.”. In return, the girls/women reward the boys/men with a painted egg and tie a ribbon on their “pomlázky”. The reward can vary and instead of or in addition to painted egg, the men are given a shot of slivovice (plum brandy) or other alcohol.

This tradition is still largely upheld, especially in villages and small towns. Although it may have lost its symbolism and romance and is now performed mainly for fun. Most of the boys and men seem to have forgotten that the whipping is supposed to be only symbolic and they hit the girls/women quite hard. That’s why some girls don’t like this tradition at all. Personally, I hate Easter because I don’t see any point in “official tradition” of whipping the women. Like I mentioned before, it has lost its symbolism (not in the villages in Moravia though) and the men just don’t care if it hurts the women or not.

Anyway, everytime I describe to foreigners how we celebrate Easter in the Czech Republic, they think I’m joking. Normally, they can’t believe it. They get very surprised, nearly shocked about these facts and they can’t understand why the women should be hit.

Easter in the hotel in Mallorca

At the moment I work in the hotel entertainment in Mallorca. We had an Easter programme for the kids which included some handicrafts, egg painting and egg hunt. I really liked the idea of hiding eggs and then searching for them. The kids enjoyed it very much, they had a lot of fun. In exchange for the painted egg, they got a chocolate egg. In my opinion, this kind of activity would be definitely much better to do in the Easter time in the Czech Republic. So let’s see if this “whipping” tradition will disappear one day and it will be replaced by something more enjoyable for everyone!