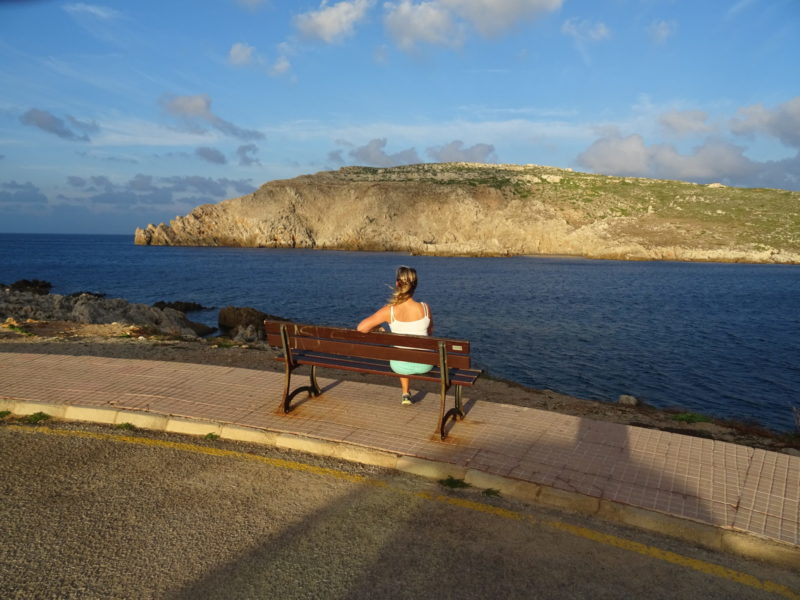 One weekend I decided to rent a car, picking it up at 12:00 on Sunday and returning at 14:00 on Monday. It was a great idea because I could have the car on both days off and I paid a price just for one day. My plan was to walk the Camí Reial, then to go to the Cala Galdana beach and at the end to visit the Torre des Fornells.

Camí Reial is also known as “Camino Real” or “Camino Viejo”. It’s one of the oldest paths of Menorca which has connected Mahón with Ciutadella since the Middle Age. However the idea that the path was part of the old Roman roads is not discarded either. Nowadays, the Ferreries section is conserved and takes you across the cliffs of Algendar to the old path of Ciutadella. The walls of the cliffs are around 40 metres high. Along the way there is a lot of vegetation – wild olive, fig trees, shrubbery, myrtle and the odd cultivated field as you cross the gully of Algendar.

My experience of Camí reial

Camí reial starts in Ferreries and leads to the Barranc d’Algendar. In the hotel they told me that it’s a nice walk so that’s why I decided to go there. I parked the car near the cemetery at the entrance to Ferreries  and then I just followed the signs. At the beginning I was quite excited about the walk, the weather was great for walking as well but at the end I was a bit disappointed. I expected a nice walk with beautiful view at the end. Instead of that I did a walk with many trees around, seeing one little cave and nothing else. Actually the nicest part was the Paseo de Revull where were some rocks around and that’s was it.

Nevertheless, the best part of the walk was that I could try fresh kaki taken directly from the tree. Comparing the the kakis that I had eaten before, the ones you can buy in the supermarkets in the Czech Republic, it tasted like completely different fruit. So I think I finally tried the “real” kaki which is very soft and tasty!

Anyway, after eating kaki I had to take the same walk back in order to get back to the car. I was walking quite fast and I was regreting a bit spending three hours by that walk. When I got back, I took a car and went to the beach Cala Galdana which is situated just 7km from Ferreries.

Cala Galdana is considered to be the most visited and most popular beach in Menorca. It’s one of the most beautiful and touristy centres isolated in a wide and virgin natural region. The beach is around 500 metres long and is well protected inside of the bay. It has rarely any waves and it has shallow water so it’s very child-friendly. There are many facilities on the beach as beach bars/restaurants, shops and water sports. It includes showers, toilets, a lifeguard and you can also rent sunbeds and umbrellas.

If you remember, I had already visited Cala Galdana several times. My first visit was last year with my Cuban friends, then I went there with my colleague Krisztina from last year and with my friend Sergio during our trip around the island. The third time was with my friends and that was the first time that I was actually lying on that beach! Cala Galdana is a beautiful beach that is worth visiting. Even though it gets busy during the high season, you can always find a place since it’s quite long and wide. My parents went there as well and they loved it!

I got to Cala Galdana around 16:30, I parked the car and then I was just walking along the beach. After that I decided to sit in one beach bar and drink my daily “café sólo con hielo” (espresso with ice). I also couldn’t resist and I ordered an ice-cream sundae. It was a great chillout with stunning view of the beach. When I finished, I decided to end up my trip with Torre des Fornells and it was like a “cherry on top”. It was the best part of my trip.

The tower of Fornells is on of the largest defense towers and best preserved in Menorca. It was built between 1801 and 1802 in order to guard the Port of Fornells, prevent the enemy coming ashore and protect the nearby Sant Antoni Castle. Torre de Fornells has a frustoconical shape and has a slope reinforcement that covers half of the wall and an access door on the first floor that could be withdrawn in case of attack. The fortress had four levels and was protected by a regiment of 50 men well supplied with ammunition and food.

I arrived to Fornells exactly before the sunset so I still had time to go up to the tower as well as to walk around. Even though it got quite windy and a bit colder, it felt special with the golden rays of the sunlight. I left the car on the parking place near the tower, first I was just enjoying the view of the rocks and the sea, then I went to see the tower. I couldn’t get inside because it was closed but I could still take some photos of the tower and the sunset. After that I was just walking around, admiring the views and taking some more photos. When the sun nearly disappeared, I took a car and went back to Cala’n Bosch.

I have to say that even though the beginning of my trip wasn’t so exciting, at the end I got back home happy and full of beautiful impressions. I wouldn’t recommend the walk Camí Reial because I didn’t find it so amazing as I was told, but Cala Galdana and Torre des Fornells, especially before the sunset, are really worth visiting!