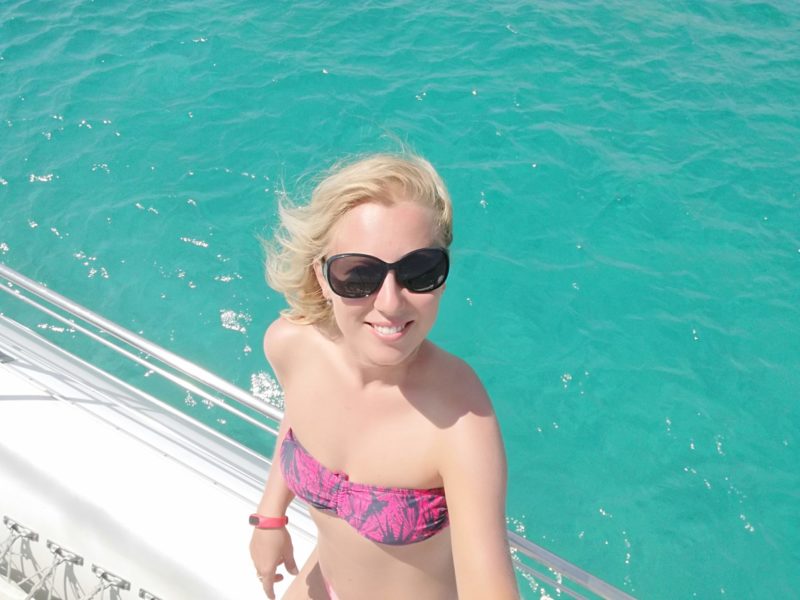 Last year, my colleague Krisztina and I wanted to do the excursion with catamaran. She did it and enjoyed it a lot. I couldn’t make it so I decided to do it this year. Two weeks ago I decided to book the excursion for my day off and I didn’t regret it.

The excursion by catamaran is organized by the company Ocean Cat Menorca. The catamaran leaves from the small port of Ciutadella and it goes to north or south coast of the island. The important factor of choosing which coast to go to is the wind direction. Menorca has the advantage that if it’s windy or bad weather, there is usually a protected corner. Going to the north coast will offer you big beautiful cliffs, steep rocks and an impressive landscape seen from the sea with special nooks and crannies and hidden beaches, a wild natural environment. Heading to the south, you will find there pretty landscape with many incredible beaches with their spectacular white sand and crystal waters.

I wanted to go to the south coast so before I booked the excursion, I was checking the wind to make sure that we’ll go there. When I went for catamaran, I was supposed to be at 10:30 in the Ciutadella port. I was there a bit earlier and that was good because when we started to get on, I could get place on the sundeck. That’s actually the best place if you want to lie down, sunbathe, relax or sit on the edge of the catamaran. If you don’t like that, there are also seats in the sun or shade.

Beginning of the excursion

We left the port at 11 o’clock listening to the nice chillout music for the morning. The music was actually a great part of the excursion, they chose it very well, it wasn’t disturbing at all, just pleasant. At the end when it got more animated, we got also some chart music and reggaeton.

Heading to the south coast gave me the opportunity to see many places that I already knew from the other side – Cala Blanca, Artrutx lighthouse, Cala’n Bosch including the hotel where I work (Grupotel Aldea Cala’n Bosch), Son Xoriguer or Cova dels Pardals.

Our first stop was at the beach Es Talaier. It’s a small unspoilt beach accessable just by boats or by walking from the beach Son Saura or Cala en Turqueta. The water is turquoise and clear. While diving you can see some rocks and different kinds of fish. We had around one hour time for swimming, diving, discovering the beach and just relaxing. The good thing is that they bring diving masks, snorkels and foam noodles that you can borrow. I took one diving mask and I went by stairs down to the sea. I was swimming to the beach, I walked there and then I went to the rocks in order to jump to the sea again, do some diving there and then get back to the catamaran. After that I just took some photos and then I was relaxing on the sundeck.

When everybody got back to the board, we got a glass of sangria which was quite pleasant. Then the lunch started to be served. All of us got a plate with pasta with vegetable and two sticks with barbecued chicken. We could also take some bread and we got a soft drink or a beer. I should probably mention that there is bar on the board where you can buy a small bottle of water for 1€, a can of Fanta or coke for 2€, a beer San Miguel for 2€ and some chips as well. After the lunch we were offered to take a piece of watermelon and then we continued our tour.

We were following the coast and we always got nearer to other virgin beaches:

Cala en Turqueta is one of the most beautiful beaches of the island. It’s a little beach with white fine sand surrounded by pine trees and divided into two parts by some rocks. The name of Turqueta (turquoise) comes from the colour of the water which is very clear and crystalline.

Cala Macarella is another paradisiacal beach of Menorca and it’s one of the most crowded virgin beaches during the summer. Cala Macarelleta is placed in the same bay like Cala Macarella. It’s smaller and often frequented by nudists. You can reach Cala Macarelleta easily from the beach Cala Macarella following the Camí de Cavalls in the direction to Cala en Turqueta. This year you can go to these beaches just with special bus, it’s not allowed to go there by cars.

Anyway, it was beautiful to see all the beaches that I hadn’t visited before even though we didn’t stop for swimming there. After getting to the last mentioned beaches, we went back. On the way back we got closer to the beaches of Son Saura and then we stopped in Cala Parejals.

Son Saura consits of two beaches separated by rocky headland in the middle. There is a Banyuls beach (facing west) and Bellavista (facing east). Both beaches together are approximately 500 metres long.

Cala Parejals is a rocky area with difficult sea access from the land. That’s why it’s favourite place for going there by boat. The water is crystalline and turquoise. There are several shallow caves. We stayed there for an hour, I was diving there near the caves and then I went back to the catamaran, I took one foam noodle and I was just relaxing in the sea.

Back in the port

After that we were heading back to the Ciutadella port. We passed closer to the beaches Son Xoriguer and Cala’n Bosch which are well-known for me. I was enjoying the last moments on the catamaran. It was quite windy when we passed the Artrutx lighthouse and there were quite big waves on the sea. It was more adventurous and kind of refreshing because of the splashing water. We arrived back to the Ciutadella port at 17:00. I have to say that I enjoyed the excursion a lot, it’s definitely worth spending the money. It’s not the typical overcrowded touristic boat, it’s something different to experience. I liked it so much that I was even thinking about repeating the excursion in case the catamaran would go to the north coast. If you’re in Menorca one day, do this excursion. You’ll be amazed by the natural beauty of this amazing island!

One thought on “Amazing excursion with catamaran Ocean Cat Menorca”