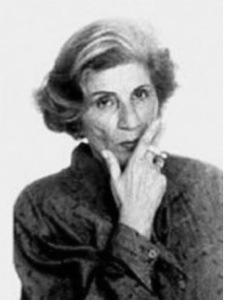 This article I decided to dedicate to Lili Zografou, the Modern Greek writer that I wrote my thesis about. She is very interesting person and I really like her thoughts which I would like to share with you as well. But first, let’s introduce her…“…a woman who dared to live the present like she wanted.”

“She exists, rejoices the life, fights, creates, loves everything. That’s why she’s always young. She doesn’t stick to the past. She has the power that she shakes off the things that make her life worse and she moves forward.”

Lili Zografou was born in 1922 in Heraklion in Crete where she spent her childhood. She got married when she was 18 years old. She gave birth to her only daughter Rena Chatzidaki (Ρένα Χατζηδάκη).Lili Zografou was writing articles to newspapers and magazines. She also wrote 24 books. Her literary work can be divided to four categories – studies and works responding to current events, poetry, drama, fiction prose (short stories, novellas, novels). She never got any literary award. The true prize for her were people that were buying her books. In my thesis I was dealing with two novels – Ι αγάπη άργησε μια μέρα (Love delayed one day) and Η Συβαρίτισσα (I Sybaritissa).

Lili Zografou was considered very rough and sometimes ruthless. She was proud and incorruptible. She wasn’t afraid to express her opinions and thoughts even if she knew it will cause uproar. She stood for her ideas at all costs and at any time. She always did the things in her way, she never subordinates to others. She also knew how to enjoy every moment of her life although it wasn’t always easy. She didn’t care about the past, she lived the present moment and didn’t care about what other people think about her lifestyle.

She was fighting for Greek women and their place in society, she was concerned with problems of women in 20th century, she wanted to eliminate intolerence between the sexes but she stood against the feminist movement.

“I am passionate antifeminist because of one simple reason, because I am very happy I was born a woman.”

“She is person with much courage and like she proved she was very brave in her private life. (…) She is person that is terribly fetching and full of contradictions like all people, she is very intense and perhaps too extreme. And I think that Lili has to be the person that people terribly love and terribly hate as well.”

She never gave up smoking and alcohol although doctors forbade it. She wasn’t afraid of death, she considered it as something physiological that has to come like for example wedding or christening. She died in 1998 in Heraklion.

“She never took life seriously. She wasn’t prepared, as she stated, for oldness nor illness.”

My thesis is focused on the main motifs of her literary work – women, love and freedom, as well as on her life philosophy and in the next article I would like to write you more about it. Maybe it seems to you that it will be boring to read about women, love, freedom and her life philosophy but Lili Zografu was a person with very progressive thoughts and I think it’s worth reading about it. I don’t want to present you my analysis of her novels, I just want to share with you some interesting things that I learnt during my research about her. So I hope you will like it 🙂