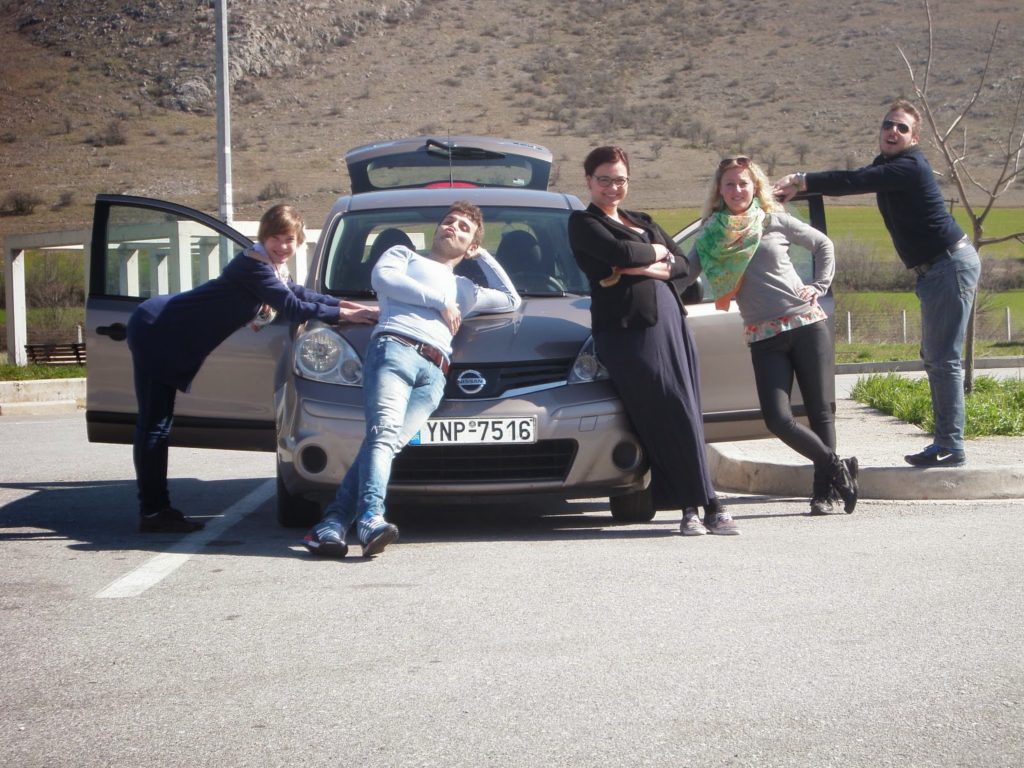 On Saturday we decided to rent a car to go to Kastoria. Kastoria is 190km far from Thessaloniki but you go just on highways so you can be there in two hours.
Our trip started with the meeting at 8:30 at Kamara. Teri was there first, obviously she’s German. I came on time, then Denisa 5 minutes later and then we were waiting for our dear Italian friends. They arrived 10 minutes later, they weren’t in a hurry at all. They came slowly, they are never in a rush.
Then we went to pick up the car in the office of Avance. We got the car Nissan Note in the colour “café latté” (it’s not from my mind, it was written in the description) and we were ready to go!
I was driving, Denisa was next to me, she was my navigator and in the back there were Gianni, Giovanni and Teri. While we were concentrating on our way, they were sleeping on the back seats.
We made just one stop on our way in order to pee and take a photo with the car! Some guys around were watching us and they couldn’t understand why we are taking a photo with the car.

Anyway, we got to Kastoria, we found the place to park unfortunately we couldn’t pay the parking fee because one of the machine was out of order and the second one took my coin and didn’t give it back. After we went for a walk, we sat on the bench to eat the snack and we met with Chrysa from ESN that lives there in Kastoria. It was great because she was our guide in the city. We were walking along the lake, we went up to the hill with church and especially with a fantastic view on town. Later on we went to the Dragon Cave with stalactites and after then we continue walking and we visited also one of the monasteries. The sun was shining, it was wonderful day with 25 degrees. On the lakes there were pelicans, geese, swans, ducks…

When we finished the walk (about 10 kilometres), we went for a coffee just to relax a bit. Then we went through the Old Town and after that we just sat on the grass and we were enjoying the sunny weather.
Our plan was to go to the taverna Allotino unfortunately because of the Easter everything was closed. We couldn’t find anything with food. There were open just café bars. We were hungry but there was nothing. We decided to get back to Thessaloniki and to eat the last things that we had – Gianni’s bucket of some chips and his sandwiches.
Even if the end of the trip was without dinner in taverna, I think that we had wonderful day!